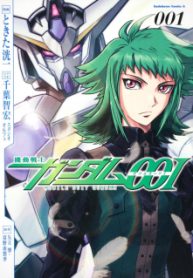 Mobile Suit Gundam 00I (“I” for Innovades) is the manga sequel and replacement for Mobile Suit Gundam 00F. It was also written by Tomohiro Chiba and illustrated by Kōichi Tokita. The story runs concurrent with Season 2 of Mobile Suit Gundam 00 and tells the story of a young man, named Leif Recitativo, who was ordered by Veda to gather a group of living bio-terminals called Innovades. Members of Celestial Being’s shadow group Fereshte (which is now disbanded and rejoined the main organization) reappear as a supporting cast to the main characters. (Source: Gundam Wiki)