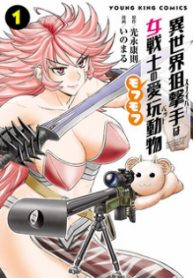 Another World Sniper Is Female Warrior's Mof-Moffy Pet ; Isekai Sunaipaa wa jo Senshi no Mofumofu Aigan Doubutsu ; The Fantasy World Sniper Is the Fluffy Pet of the Woman Warrior ; The sniper is a female warrior's fluffy pet in another world ; 異世界スナイパーは女戦士のモフモフ愛玩動物 ; 異世界狙撃手は女戦士のモフモフ愛玩動物

A gun otaku dies after toying with a homemade pistol that explodes in his face. In the afterlife, he is told that he will be reincarnated into another world. When the otaku wakes up, he finds that he is no longer human – he’s now just some little furry thing. Near death, he comes across a beautiful warrior, who decides to take care of him because he’s fluffy. However, things take a turn when he finds out that firearms exist in this world?

From the writer of Time Stop Brave and Princess Resurrection comes a new isekai story, which has bears, boobs, and bullets.