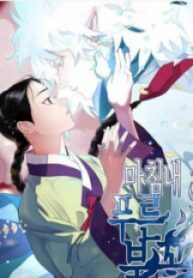 If one day a blue flame appears, my life will shine brightly.” Princess Jeong Myeong, lost in Yeongchang-gun by Gwanghae-gun and was confined in the Gyeongung Palace with her mother, Inmok. Kim Gae-si, the palace of Gwanghae-gun, is overlooked by the chance to kill her. In the cold and desolate Gyeongung Palace, Jeong Myeong feels the presence of someone who has been around her from one day. “I am the king of goblins, the one who keeps you.” “The king of goblins? Do you have a name?” “I do not.” “Then I will give you one. Your name is… dating.” The curse of the impenetrable goddess of life imprisons Myung Myung’s life and is in danger of losing everything she wants. “Come on. Jeongmyeong, I was waiting for you.”

Thank you for reading. If you want any request, feel free to tell us.