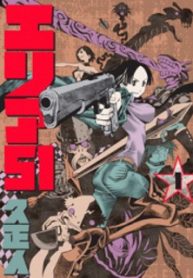 In the American Area 51, there is a society where many varied supernatural creatures–kappa, vampires, aliens, gods and goddesses of various mythologies, mythological figures (like King Arthur), and more– make their home. In addition to the non-humans, there’s also a population of humans, people who can’t live in the ordinary world for one reason or another. One of these people is Magoi Tokuko, commonly known as Makkoi, a tough woman who works cases with the help of her kappa associate, her deep knowledge of the area, and her pistol. In her office, which she’s built in an unfinished subway station, she takes on all kinds of jobs (recovery of stolen goods, infiltration, etc.) from the many humans and non-humans who come to pay for her help.